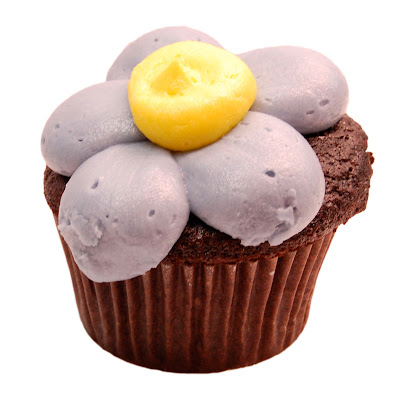 Frosting Too buttery and too sweet - it kind of stings your throat when you swallow. Moderately dense, with a slight crusty film on the outside. Rating 5.5

Overall I always try to choose a chocolate cupcake with plain vanilla frosting whenever possible so that my comparisons aren’t influenced by other factors. In this case, I also had a chocolate cupcake with chocolate frosting (yes I ate two cupcakes, so sue me) and the chocolate frosting was much, much better than the plain. I would rate the chocolate frosting as a 7.5. This particular cupcake above would have rated similarly if not for the frosting.
The problem of rating based on a single cupcake is that cupcakes aren’t always going to be consistent from day to day. That said, however, consistency is important, and it is one of the reasons that I like Dinkel’s so much and is why I like to consider it the standard - they are consistent and reliable. Overall Rating 6.25/10
Posted by Justin at 10:42 AM
Labels: 6.0 - 6.9 rating