A Taste of Heaven 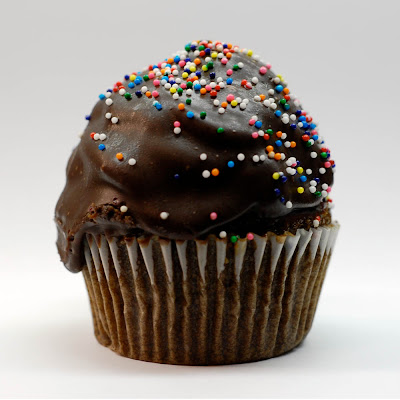 Frosting The ganache covering the buttercream frosting is rich and way-super-chocolaty. The flavor in the chocolate buttercream itself, however, was a little hard to discern. The buttercream was a little dense and seemed to have more the consistency of a paté than a frosting. Without the ganache, I would probably give the frosting a 7.0. Rating 8.5/10

Cake The texture of cake was chewy, substantive and moist, with a larger crumb. The chocolate flavor was fine -- not too subtle, not overbearing. Rating 8.5/10

Overall This was overall a very nice cupcake. A word of warning, however: The ganache is so rich and chocolaty that this really should be a 2-person cupcake. I have a pretty high sugar tolerance, but even I felt light-headed and dizzy after eating this whole cupcake (and that says something).

Apart from the cake, however, I have to say I have been disappointed more than a couple of times with the service at A Taste of Heaven. The last time I went there was about 3 years ago, and I actually had stopped visiting because of the service. Previously, it seemed that the employees were more interested in talking to each other than they were waiting on the counter; this time, it seemed like I waited an unnecessarily long time for service, which was made to seem even longer by the fact that there was an employee just standing next to the counter doing nothing while another worker was helping the person in front of me. My friends will say that I have perhaps an abnormally low tolerance for poor or even mediocre service, so in fairness I should point that out; I do tend to be overly critical about such things.

No review this week....just a shirt my friend Jason got me, in Taiwan of all places. 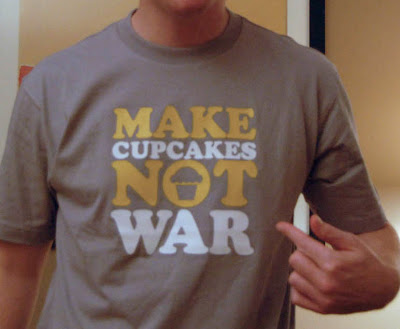 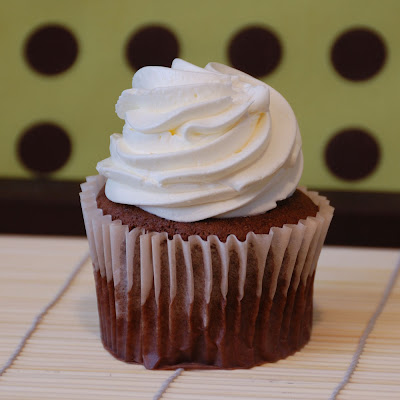 Frosting The frosting was light and marshmallowy. The lady at the counter said it was a buttercream, but I really don't think it was -- the texture and taste was just too much like a stabilized whipped cream. Also, speaking of taste, it seemed to have absorbed the flavor of something else in the display case, because it had a slight tiramisu-like flavor. Finally, it was rather bland. Rating 5.0/10

Cake If the frosting was disappointing, the cake was a disaster. The bottom third of the cupcake was soggy and had an alcohol flavor, like it had been saturated in vanilla extract (maybe this is what the frosting was picking up). The top of the cake was okay. It had a delicate chocolate flavor and a spongy texture. If not for the soggy mess at the bottom I might have rated the cake a 6.0, but I just can't make any excuses to give it a good rating. Rating 2.0/10

Overall There is just nothing more to be said -- there is no excuse to sell a cupcake of this quality. I've had other sweets and pastries at Lutz, and none were as bad as this, so hopefully this was just a fluke. Overall Rating 3.50/10.0
Posted by Justin at 12:00 AM No comments:
Labels: 3.0 - 3.9 Rating, smooth frosting 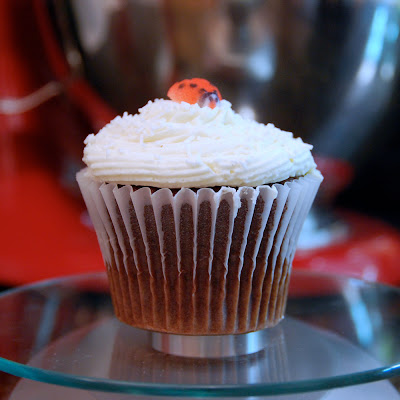 Frosting Smooth and slightly on the heavy side. The frosting was rich and creamy, but mixed on the white chocolate flavor. Rating 7.0/10

Cake Slightly dry and crumbly, which is unfortunate because it really detracts from the decent chocolate flavor that would otherwise make for a pretty good cupcake. Rating 6.0/10

Overall I really didn't expect that I'd enjoy this cupcake from Café Selmarie at all. A lot of the other cakes and desserts here seem to me to be very bland. However, they always looked so good that for a couple of years I would convince myself to try them just one more time, thinking that the next one will taste better. However, each time I was disappointed, and each time I would say to myself, "Never again." Alas, I found myself there the other night with some friends and I noticed that they have cupcakes, so I decided I'd have to at least give them a chance. (For the record, the banana eclair I had that night once again disappointed - it was just so bland to me that the only thing that saved it was the banana).

Although my expectations were pretty low with the cupcake, it didn't turn out to be bland like the other desserts I've had. Though the white chocolate didn't really add flavor, but at least the frosting was actually sweet, creamy and rich. And the cake had a decent chocolate flavor. All in all, while it wasn't a bad cupcake, I thought it was just little bit below the Dinkel's standard, mostly due to the density of the frosting and the slightly dry cake. Overall Rating 6.50/10.0
Posted by Justin at 12:00 AM No comments:
Labels: 6.0 - 6.9 rating, heavy, smooth frosting
Newer Posts Older Posts Home
Subscribe to: Posts (Atom)