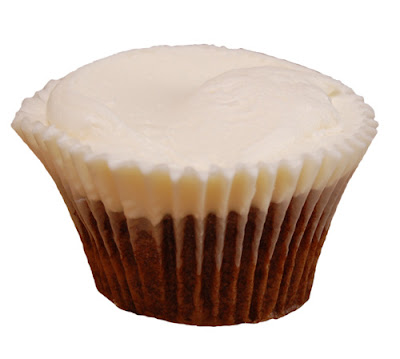 Frosting Heavy and slightly dry, with a delicate outer crust. Powdered sugary aftertaste. A buttery frosting with a hint of graininess. Good frosting, but a little too sweet. Rating 7.0/10

Cake The light chocolate cake had a crumbly yet sufficiently moist texture. Rating 7.0/10

Overall Southport Grocery does make a decent cupcake. I put it on par with Dinkel’s, though each has distinctly different qualities. I used to give my co-workers a hard time when they raved about Southport’s cupcakes, insisting to them that Dinkel’s was far better. But in all honesty, both are good cupcakes; I don’t see the differences as making either one necessarily better than or inferior to the other. Overall rating 7.0/10
Posted by Justin at 12:00 AM No comments:
Labels: 7.0 - 7.9 rating, grainy frosting 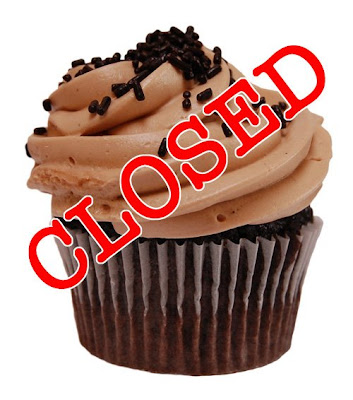 Frosting The frosting is smooth, light and airy. The texture is similar to a chocolate mousse. Very silky, and not too sweet. Rating 7.5/10

Cake The cake is moderately dense but moist, and it has solid chocolate flavor – not too weak and not overbearing. Rating 7.5/10

Overall This is a quite pleasing cupcake. It’s a bit on the pricier side, but to be fair this is the plainest version that Cupcakes makes; if their other cupcakes that incorporate mango or chai (or any of the other intriguing flavors I saw in the display case) have the same quality as this one, then I’d say the premium is well- justified. Overall rating 7.5/10
Posted by Justin at 12:00 AM 3 comments:
Labels: 7.0 - 7.9 rating, smooth frosting 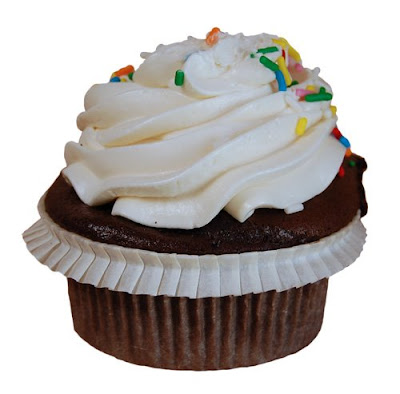 Frosting Smooth and light. Taste is somewhat plain, though not bad. Has a slightly greasy texture; I'm guessing it's made with shortening and butter. Rating 7.0/10

Cake Moist inside with a chewy, slightly over-baked cake top. The contrast of the moist crumb with the chewy top shell is an interesting combination, giving the cake some substance. Not a strong chocolaty taste, but still flavorful. Rating 7.0/10

Overall Dinkel’s has been around since 1922 and has some of the best cakes and pastries in the city. My love of cupcakes began with Dinkel’s, in 1998 -- when I had no money and could afford to treat myself only to small indulgences. At $0.93, it was one of my favorites and I would look forward to having a Dinkel's cupcake once or twice a week. They used to come with a plastic toy ring on top, and I was enough of a regular that the staff began to ask my preference for which type of ring I wanted each time, as though I was collecting them (I was).

Dinkel's makes a very good cupcake. They're consistent, flavorful, large and a great value. I think this makes it a good standard by which to compare other cupcakes. It might not be the very best cupcake you’ll ever have, but it has a good balance of flavor and texture that will satisfy your palate (and craving) every time. And for the price, it is one of the best cupcake values in the city. Overall rating 7.0/10