The best cupcake recipe ever

Thanks to Grant Miller.
Posted by Justin at 9:03 AM No comments: 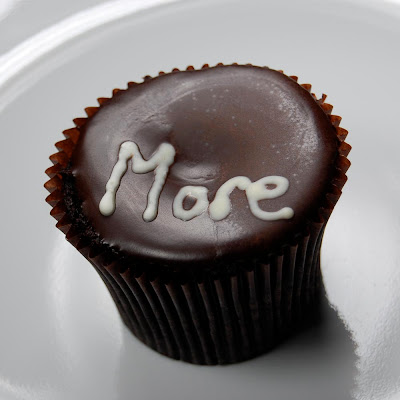 Frosting The chocolate ganache is rich and creamy, like eating a good piece of chocolate from a box. Rating 8.0/10 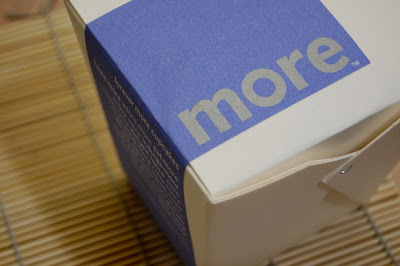 Overall I don't know the reason for the Chinese takeout containers. Maybe because after you eat the cupcake you're hungry an hour later? I have to say though that I like the fact that they have an insert in the box that is perfectly sized to fit the cupcake, and you can get the cupcake home without even the slightest damage to the frosting. And even more, there are finger holes that let you pick up the cupcake out of the box without even having to touch the top of the cupcake. So if you're looking to give a cupcake as a gift and want to keep it looking as good as it did in the shop, this is the place for you. Oh, and the cupcakes aren't bad either. Overall Rating 8.75/10.0

* I usually just average the ratings for the frosting and the cake for the Overall rating, but I'm giving it a higher Overall rating because the marshmallow filling really did give it the flavor and nostalgia of a Hostess cupcake. Nicely done.

Check out the famous Cupcakes Take the Cake. Cupcake Race wrote an article for their blog. 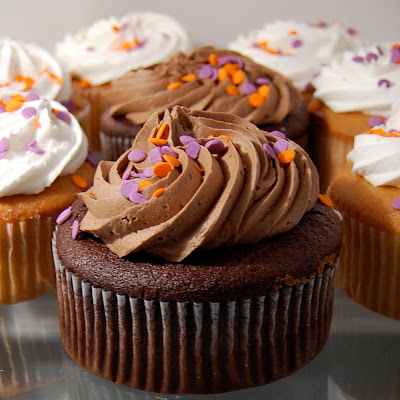 Frosting Slight hint of graininess, buttery, with a fudge chocolate flavor. It has a thick consistency, but it's not particularly heavy -- more like a really thick mousse, maybe. I don't really like the richness of the fudge flavor, but it was good enough to enjoy. The plain frosting on the yellow cupcakes was better. Rating 6.5/10 (chocolate) 7.5/10 (vanilla) 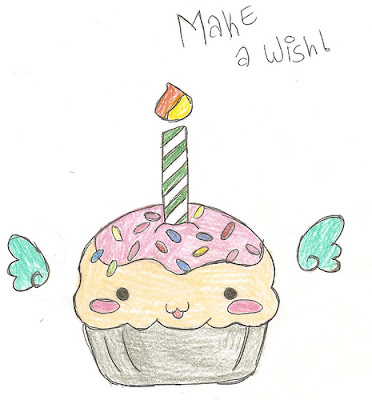 Congratulations Shari! You won the Cupcake Race contest for the readers' favorite cupcake art! All of the finalists were really great, but with 48% of the vote, the Cupcake Race readers voiced a clear favorite!

The Grand Prize winner, Harper, will be receiving a t-shirt with his cupcake drawing on it, and Shari will receive a $10 gift certificate to Sweet Honeybee Bakery, on Montrose Ave. (one of our favorite bakeries!). We'd love to hear from you and Harper if you would like to write something on the blog about what inspired your idea and why you like art...or anything you'd like to write.

And finally, congratulations are in order to everyone who participated in the contest to create some really fun, inspired and interesting art! We had a lot of fun with the contest here, and we hope you did too.

Don't forget to vote your favorite!

There is still one more prize to give away! The Grand Prize went to Harper F., whose drawing of a cupcake on the rampage can be seen in the previous post. But there is still First Prize to award, which will be determined by the winner of the online poll (see sidebar). Voting ends at 11:59pm on November 19th.

The winner of First Prize will get some suitable award -- probably a gift certificate for a couple of cupcakes -- and, of course, have his or her drawing featured on cupcakerace.com.
Posted by Justin at 8:12 PM 1 comment:

The entries are in, and the winner Is....

The entries for the Cupcake Race Art Contest are in! If you recall, the kids at Pilgrim Lutheran School in Chicago were invited to create original cupcake-themed artwork for the contest. You can see all of the excellent drawings by clicking on the Flickr link on the sidebar at the right.

Before announcing the winners, let me remind you how the contest works. Cupcake Race will select the top five (5) drawings from among all the entries. From these, one Grand Prize winner will be selected by Cupcake Race. The Grand Prize winner will receive a t-shirt in addition to having his or her art featured on cupcakerace.com. In addition, his or her entire class will receive cupcakes!

Vote for your favorite!
And now, Grand Prize in the Cupcake Race Art Contest goes to..... 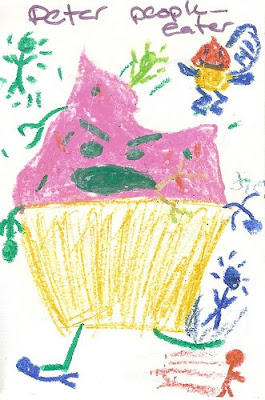 Now, for the online poll...

The remaining 4 finalists' artwork is shown below. Please vote for your favorite at the top of the page. The online poll closes at 11:59 PM on November 19th. 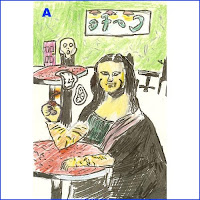 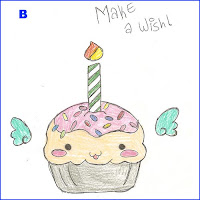 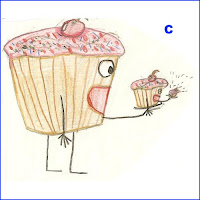 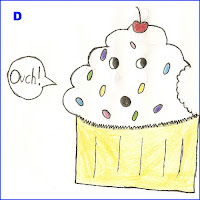 Cupcake Race is sponsoring its first ever contest! The kids at Pilgrim Lutheran School in Chicago will be creating original art that represents some idea they have that involves cupcakes. It might be their concept of what the "perfect" cupcake would look like. Or maybe their interpretation of what a cupcake's worst nightmare would be. What would a family of cupcakes do for vacation? Whatever concept or idea regarding cupcakes they wish to convey. The basic guideline is that it has to be original and it has to cupcake-themed.

Cupcake Race will narrow the contestants down to the top five (5), and choose one (1) Grand Prize winner. The winner will receive a t-shirt and have his or her art featured on cupcakerace.com. In addition, the winner's ENTIRE CLASS will receive cupcakes!

The remaining four (4) finalists will participate in an online poll, where readers get to vote for their favorite of the four. The winner of the on-line poll will also have their art featured on cupcakerace.com.

Both the Grand Prize winner and the winner of the online favorite will get to write on cupcakerace.com about what inspired their idea and anything they want to share about their art, if they so desire.

The students will be submitting their entries by November 7th, and the entries will be posted online as soon thereafter as possible. Voting for the online poll will run for ten (10) days.

Finally, I want to thank my blogger friend Beck for collaborating and making this idea possible! Way to go Beck!! 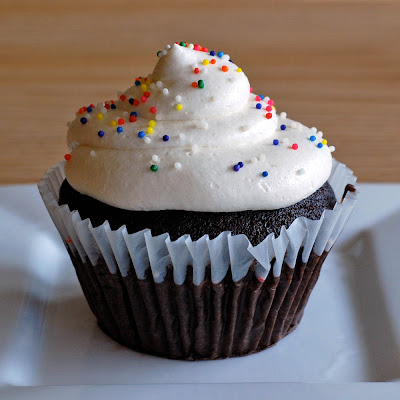 Frosting The nice lady at the counter explained to me that the frosting was made with a "rue," which I learned was a mixture of flour and milk added to the buttercream. This, she says, enables you to make the buttercream real light and helps keep it from being too sweet. It worked. The frosting was super-light, almost like a whipped cream, and not too sweet...and still had the graininess that I like so much. The only drawback was that it just seemed a little "lumpy" or coagulated. I had to knock it down half a point for that. Rating 8.0/10

Cake Good substance, for the most part moist, but a little bit on the dense side so in some places it tended to seem just a little dry. Chocolate flavor was really good though. Rating 8.0/10

Overall Su Van's is just 1/2 block north of Dinkel's, so it has formidable competition. (But Su Van's is really more of a brunch/lunch place, which Dinkel's is not.) The thing I noticed about the cupcakes here is that they all look great without trying to be perfect. They just seem to me to look like what a cupcake should look like, if that makes any sense. I find that a lot of times cupcakes that have that "perfect" look are the ones that don't necessarily taste that great. But these were well put-together, good proportions of frosting to cake, and just looked really clean. And the one I had tasted really good. Overall Rating 8.00/10.0
Posted by Justin at 12:00 AM 1 comment:
Labels: 8.0 - 8.9 rating, grainy frosting 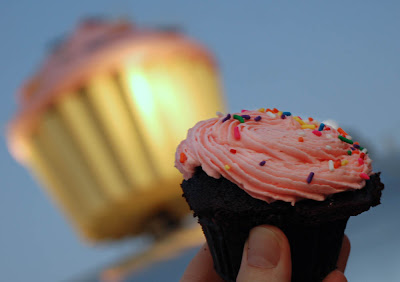 Frosting The frosting was light and very lick-able, and the best way I can describe the texture is that it had a chalky or powdery feel -- which is not to say I didn't like it. I liked it very much. It was perhaps just a tiny little bit too sweet, but overall, it was a very respectable frosting. Rating 8.25/10

Cake The cake was perfectly moist and tender, and it had a dark/bittersweet chocolate flavor, which paired nicely with the sweet frosting. Rating 9.25/10

Overall I did some Googling for cupcakes in Austin and came across Hey Cupcake! On my way, I envisioned a cupcake stand, but I didn't picture a cupcake stand fashioned out of an Airstream trailer parked in an empty lot. But, hey, it's Texas afterall.

I was staying at the Four Seasons (love those corporate rates!) and asked the concierge for the address of Hey Cupcake! With the same seriousness and professionalism as if I had just asked for reservations at the finest steakhouse in Austin and orchestra prime seats at the opera, he found the information and printed it for me. Then, although I had asked for a mere taxi, the valet instead called the hotel driver. So there I am, being chauffeured in a shiny black Lincoln Continental, to a gravel parking lot where there sits only a cupcake trailer and a couple of patio tables. I can only imagine what people thought as they watched me step out of the limo, walk up to the trailer and order a cupcake. The driver offered to stay and wait for me, but, feeling slightly embarrassed, I told him I'd just try to find a taxi on the way back.

So the cupcake: I thought this was a really great cupcake. The frosting was just a little too sweet for my taste, otherwise I'd probably give the cupcake a 9.25 overall. But as it was, it couldn't have been much better. Overall Rating 8.75/10.0 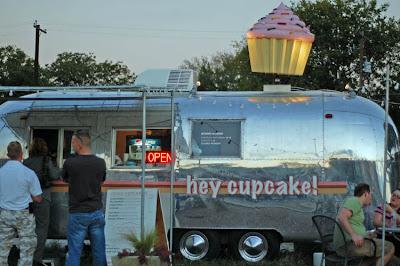