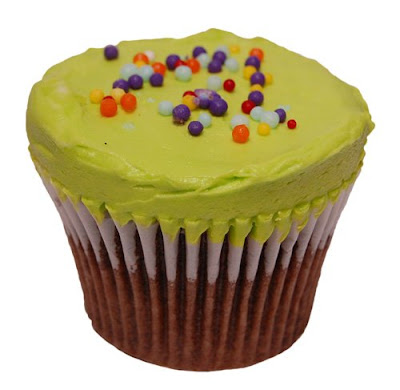 Frosting Slightly grainy and somewhat dense (which is partly evidenced by the overall weight of the cupcake). However, the flavor was a little off; perhaps the frosting had been frozen at one point, or perhaps the food coloring is lending a hint of unusual flavor, I don't know. I would characterize the frosting as decent, even with the slightly off-taste. Would have rated a 7.5 otherwise. Rating 6.5/10

Cake A slightly chewy cake with plenty of substance. A noticeable chocolate flavor without being either too weak or overbearing. Rating 7.5/10

Overall This was still a better than average cupcake, though the off flavor of the buttercream was a bit of a hindrance. For the price, however, I think it's a pretty good value. Overall Rating 7.0/10
Posted by Justin at 12:00 AM
Labels: 7.0 - 7.9 rating, grainy frosting